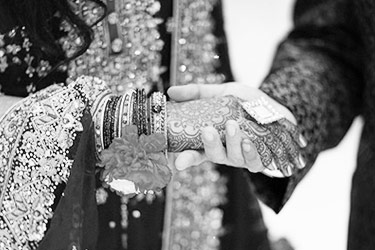 In Islam, marriage is a social and legal relationship intended to strengthen and extend family relationships. Islamic marriage begins with a search for an appropriate partner, and is solemnized with an agreement of marriage, the contract, and the wedding party. When searching for a spouse, Muslims often involve an extended network of friends and family. Most of the weddings are arranged and the boy and the girl have the final decision in selecting their prospective bride or the groom.

After a couple signs the Islamic marriage contract, families usually hold a public wedding party. In the Muslim world, there are colorful, cultural variations from place to place. The various wedding traditions reflect the diversity of the Muslim world. Wedding ceremony is known as ‘Nikah’ in Urdu.